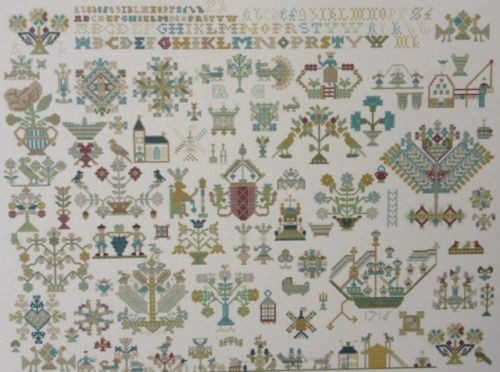 This is a superb needlework chart pack from France by Reflets de Soie, taken from a simply fabulous Dutch sampler dated 1716. From one of the symbolic motifs it appears to have been worked by a young girl from the town of Leeuwarden, in Friesland, Holland.

Isabelle has included some information about the symbolism of some of the motifs (in french), mostly concerning the three stages of the life of a lady La Femme - La Menagere, La Femme - L'Epouse and La Femme - La Mere.

This is simply breathtaking and delightful needlework pattern, endless uses and what a worthwhile project if worked in its entirety.

The chart is a clear black symbol chart printed over several A4 pages, with a key given for DMC thread colours. Algerian stitch is included in addition to cross stitch, with a clear diagram and charting throughout. The copy is in french, but all is self-explanatory and the design is easily convertible to your own colour scheme. A4 sheets are folded inside an A5+ pack.